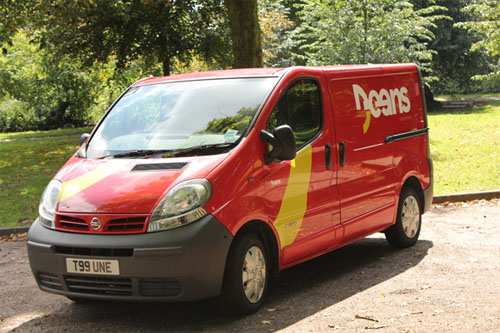 Our red nissan vanette was part of the family, always there and always willing and able. So great was our affection that it (no, he) became known as the DiscoVan. Bright red in all it’s splendour with it’s slightly odd quirky shape, it soon became a firm favourite at all our events. The DiscoVan was there as the team sailed down the thames for Sellincourt shool’s centenary gig. DiscoVan was there as we headed through the greys of North Yorkshire from London. DiscoVan graced many a Summer Fair, Wedding, Birthday bash and Anniversary.

So imagine the shock, when we received notice that due to the van’s age (registered new pre 2001) it was now no longer suitable for London’s streets! TFL (Transport For London) were introducing a low emissions scheme and DiscoVan was no longer fit and proper to grace London’s streets. A glut of vans traded hands including DiscoVan who headed North to become a landscape gardener’s vehicle of choice.

We waved goodbye to DiscoVan as he turned the corner of the London road, never to be seen again. Ah, the good times!

We’ve since replaced DiscoVan with a new commercial vehicle but every time we head to an event, the team still reminisce the good times spent with DiscoVan, loading, unloading, Earth Wind & Fire on the radio. Let’s hope the Landscape gardener appreciates the love and affection deanscreative had for it’s van. Long live DiscoVan!