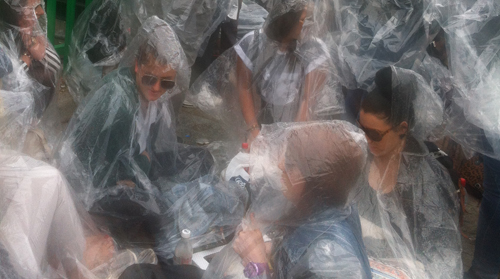 A heavily overcast sky loomed over a mile long queue of excited, loyal and unfazed Rihanna fans; the anticipation of seeing the Princess of Pop and RnB surpassed any potential weather warning. Many fans had been queuing for more than six hours equipped with books, iPods and the customary festival rain macs.

The iconic Twickenham Stadium was home to over 65,000 enchanted fans adorned with Rihanna’s eminent ‘R’ across their cheeks. Wall to wall Hip Hop, R&B and Pop anthems filled the stadium and we sung and danced along to the classics for at least an hour before the first performance of the night was showcased.

@WeAreGTA effortlessly warmed the crowd up with their remarkable set of original mixes and remixes of modern hits such as ‘Paris’ by Jay Z and Kanye West. Edgy, fresh and extremely talented, the duo entertained with their contagious and unapologetic riffs and drops.

@WeAreGTA left the crowd wanting more – and that arrived in the form of David Guetta, one of the most iconic House music producers in the music industry today. The crowd were raucous in their applause as he kicked off his set with ‘Play Hard’ featuring r&b sensation Ne-Yo and by his third track ‘Titanium’- Guetta had the crowd wrapped around his little finger. It had turned into a party

The stage was rearranged for the headline act and after an excruciatingly long wait for her entry (an hour later), Rihanna strutted onto stage, flanked by animated dancers, drummers and guitarists- the energy in the stadium was out of this world and her presence sent every fan into a raucous frenzy.

Opening track ‘Phresh Out The Runway’ a raw, contagious Hip Hop beat, made for a flawless opening. With fans guided through renditions of modern classics such as ‘Pour It Up’, ‘Man Down’ and ‘Loveeee Song’. The concert reached an explosive climax, when Rihanna performed ‘Jump’ with the aid of stunning pyrotechnics.

Rihanna put her impressive dance moves to the side as she poured out raw, moving emotion through her hits ‘Stay’ and ‘Hate That I Love You’ all leading to her breath-taking final performance of ‘Diamonds’, which was effortlessly executed with the help of her fans.

The night was one to remember- the sheer dedication and support from the fellow fans brought Rihanna close to tears as she ended with a stirring and inspirational speech. Great atmosphere, super fans and one to remember. Well done, Rihanna!